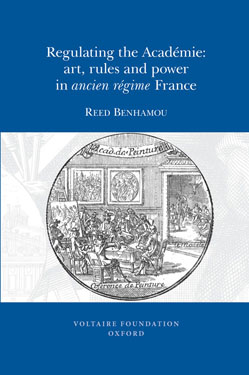 The acclaimed Académie royale de peinture et de sculpture, the second oldest academy in France, was abolished in 1793. Whilst a number of studies have explored the drama of its dissolution, often associated with a speech by former member Jacques-Louis David, this outcome can only be fully understood in the context of the evolving governance of the institution.

In this groundbreaking work, Reed Benhamou provides the first comprehensive examination of the codes and practices of the Académie, from its inception in 1648 to its abolition in 1793. As well as exploring why certain rules were adopted, how they facilitated the development of institutional power bases, and the part they played in the Académie’s growing factionalism, the author uncovers changing attitudes to the guild, women, associate academicians and unaffiliated artists. This astute and comprehensive analysis is followed by nine annotated appendices of both registered and proposed statutes and of other related documents, many of which are made readily accessible for the first time.

Offering new insights into the tensions between art and state throughout the ancien régime and beyond, Regulating the Académie is an invaluable reference not only for art historians, but also for those working in cultural or legal history.

Benhamou succeeds in delivering a crisp account of the institution’s history in a well-paced ninety-two pages.[…] The second part […] of Benhamou’s book comprises nine appendices in which the various iterations of the Academy’s statutes are reproduced. […] This, along with Benhamou’s judicious summary of the history of the organization and her excellent bibliography, make this volume an essential addition to the library of any scholar of seventeenth- through nineteenth-century French art.

Benhamou’s articulate, comprehensive description of the stages of the Académie’s administrative evolution recalls the fragility of our own institutions amidst recent internecine political tensions and power struggles.