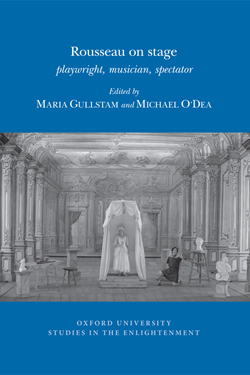 Following his opposition to the establishment of a theatre in Geneva, Jean-Jacques Rousseau is often considered an enemy of the stage. Yet he was fascinated by drama: he was a keen theatre-goer, his earliest writings were operas and comedies, his admiration for Italian lyric theatre ran through his career, he wrote one of the most successful operas of the day, Le Devin du village, and with his Pygmalion, he invented a new theatrical genre, the Scène lyrique (‘melodrama’).
Through multi-faceted analyses of Rousseau’s theatrical and musical works, authors re-evaluate his practical and theoretical involvement with and influence on the dramatic arts, as well as his presence in modern theatre histories. New readings of the Lettre à d’Alembert highlight its political underpinnings, positioning it as an act of resistance to external bourgeois domination of Geneva’s cultural sphere, and demonstrate the work’s influence on theatrical reform after Rousseau’s death. Fresh analyses of his theory of voice, developed in the Essai sur l’origine des langues, highlight the unique prestige of Italian opera for Rousseau. His ambition to rethink the nature and function of stage works, seen in Le Devin du village and then, more radically, in Pygmalion, give rise to several different discussions in the volume, as do his complex relations with Gluck. Together, contributors shed new light on the writer’s relationship to the stage, and argue for a more nuanced approach to his theatrical and operatic works, theories and legacy.