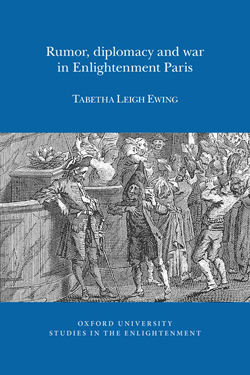 Paris 1744: a royal official approaches a shopkeeper’s wife, proposing that she become an informant to the Crown and report on the conversations of foreign diplomats who take meals at her house. Her reports, housed today in the Bastille archives, are little more than a collection of wartime rumors gathered from clandestine, handwritten newspapers and everyday talk around the city, yet she comes to imagine herself a political agent on behalf of Louis XV. In this book Tabetha Ewing analyses different forms of everyday talk over the course of the War of Austrian Succession to explore how they led to new understandings of political identity.

Royal policing and clandestine media shaped what Parisians knew and how they conceptualized events in a period of war. Responding to subversive political verses or to an official declaration hawked on the city streets, they experienced the pleasures and dangers of talking politics and exchanging opinions on matters of state, whether in the café or the wigmaker’s shop. Tabetha Ewing argues that this ephemeral expression of opinions on war and diplomacy, and its surveillance, transcription, and circulation shaped a distinctly early-modern form of political participation. Whilst the study of sedition has received much scholarly attention, Ewing explores the unexpectedly dynamic effect of loyalty to the French monarchy, spoken in the distinct voices of the common people and urban elites. One such effect was a sense of national identity, arising from the interplay of events, both everyday and extraordinary, and their representation in different media. Rumor, diplomacy and war in Enlightenment Paris rethinks the relationship of the oral and the written, the official and the unofficial, by revealing how gossip, fantasy, and uncertainty are deeply embedded in the emergent modern, public life of French society.

‘An informative study that examines a period slightly earlier than most works on public opinion’ […] Sketches of colorful individuals, such as a shopkeeper’s wife who amused French officials by sending them detailed, unsolicited advice on foreign policy, make for compelling reading […] A model of how to integrate popular opinion into works on foreign policy.’