illusion and the transformation of dramatic writing in Diderot and Lessing 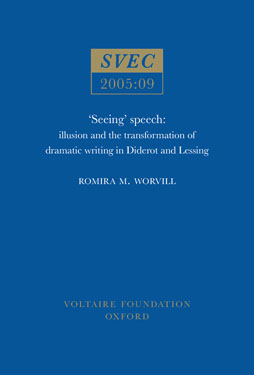 This book explores the relationship between Diderot’s dramatic theory and plays of the late 1750s and the dramatic practice of G. E. Lessing. It proposes a new way of looking at how Diderot’s theatrical writings influenced other dramatists by situating his theory in the context of the contemporary discourse concerning painting (with its emphasis on the creation of illusion as the goal of visual art) and of the debates about prose drama (one manifestation of the transposition of the arguments about painting into the realm of writing). Diderot’s dramatic theory is shown to transform neoclassical ways of thinking about how plays communicate with their audience by urging the exploitation of artistic signs that are, in terms of eighteenth-century semiotics, natural. This approach has profound implications for the form taken by dramatic language which, in Diderot’s view, must create an illusion for the ear of the beholder, just as the visual signs should create one for the eye. The changes that characterise Lessing’s mature dramatic style are a striking illustration of how the move to the use of natural theatrical signs can transform the writing of plays. In particular, the evolution that occurs in Lessing’s capacity to create effective dramatic dialogue before and after 1760 (the year when his translation of Diderot’s theatrical writings was first published) provides a fascinating case study of how the new thinking about illusion as an effect resulting from the deployment of natural artistic signs generated a radically different kind of dramatic speech. This study also shows how this seismic shift in aesthetic values brought about a reorientation of the creative stance of the dramatic writer. Playwrights cease to think of themselves as rhetoricians and poets addressing an audience and begin to align themselves instead with the painter positioned before his subject and his canvas. Acknowledgements List of abbreviations Introduction I. Theories of art and literature: the background to Diderot’s innovations 1. Roger de Piles and the painterly sign 2. Houdar de La Motte and the ‘invisible poet’: the self-effacing linguistic sign 3. Paul Landois and the ‘hidden spectator’: the use of natural theatrical signs in Silvie II. Synthesis and innovation in Diderot’s dramatic writings 4. The ‘invisible poet’ and the ‘hidden spectator’ in Diderot’s dramatic theory and plays: the new theatrical code III. Lessing’s assimilation of the new theatrical code 5. Lessing’s treatment of dramatic language in the early comedies and in Miss Sara Sampson and Philotas 6. Illusion, signs and speech in Lessing’s dramatic theory and criticism from the Briefwechsel to the Hamburgische Dramaturgie 7. The theatrical code in Lessing’s mature plays Conclusion Bibliography Index