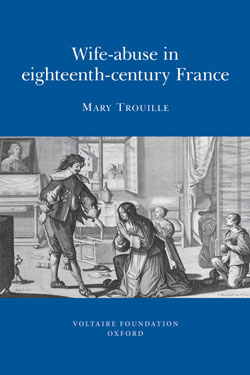 Recent archival research has focussed on the material conditions of marriage in eighteenth-century France, providing new insight into the social and judicial contexts of marital violence. Mary Trouille builds on these findings to write the first book on spousal abuse during this period.

Through close examination of a wide range of texts, Trouille shows how lawyers and novelists adopted each other’s rhetorical strategies to present competing versions of the truth. Male voices – those of husbands, lawyers, editors, and moralists – are analysed in accounts of separation cases presented in Des Essarts’s influential Causes célèbres, in moral and legal treatises, and in legal briefs by well-known lawyers of the period. Female voices, both real and imagined, are explored through court testimony and novels based on actual events by Sade, Genlis, and Rétif de la Bretonne. By bringing the traditionally private matter of spousal abuse into the public arena, these texts had a significant impact on public opinion and served as an impetus for legal reform in the early years of the French Revolution.

Trouille’s interdisciplinary study makes a significant contribution to our understanding of attitudes towards women in eighteenth-century society, and provides a historical context for debates about domestic violence that are very much alive today.

Introduction. Scorned, battered and bruised: marriage and wife-abuse in eighteenth-century French fiction and society
I. Socio-historical and legal contexts
1. Moderate correction, rule of thumb: the norms of spousal abuse in eighteenth-century France
II. Wife-abuse in the courts: separation cases from Des Essarts’s Causes celebres and Bellart’s Mémoires
2. For better or worse? Venereal disease as grounds for marital separation in the case of Mme Blé (Reims, 1757 and Paris, 1771)
3. A victim of her own naivety? The separation suit of the marquise de Mézières (Paris, 1775)
4. Battered wife or clever opportunist? The separation case of Mme Rouches (Toulouse, 1782)
5. Challenging male violence and the double standard in the courts: the separation case of Mme
6. Bellart’s critique of the 1792 divorce law in his defence of Mme de L’Orme (Paris, 1803) and M.
III. Wife-abuse in eighteenth-century French fiction
7. ‘Until death do us part’: fact and fiction in Sade’s Marquise de Gange
8. Buried alive: Genlis’s Gothic tale of marital violence in ‘Histoire de la duchesse de C***’
9. Truth stranger than fiction: wife-abuse in Rétif de La Bretonne’s Ingénue
Conclusion: Intersections of literature, law and life experience in accounts of wife-abuse
Bibliography
Index

The Journal of Law and History Review, Volume 28/3

Mary Trouille’s Wife Abuse in Eighteenth-Century France brings a legal-literary approach to understanding domestic abuse and marital separation cases in pre-Revolutionary and Revolutionary France. […] By juxtaposing legal and literary sources, Trouille succeeds in demonstrating how much social and legal historians can learn from each other.

Trouille makes a convincing case for the efficacy of her examples both to understand prevailing attitudes towards spousal abuse and to seek evidence for how those attitudes changed over time. […] her insightful analysis of literary material in dialogue with the legal cases makes a convincing and valuable contribution to the field of eighteenth-century French studies.

Trouille’s book can serve as a model for the possibilities and proper deployment of interdisciplinary methodologies. With a keen eye to historical context and literary criticism, Trouille pays particular attention to the overlaps between the literary and legal, the public and the private, the family, and the individual in judicial and literary approaches to abusive marriages, the position of women and divorce. […] Those interested in questions of post-Enlightenment changes in the nature of gender roles in French society will find her book to be a goldmine of research and insight.