Because English drama, like its French analogue, was still largely written in verse at the time Voltaire was writing the Lettres sur les Anglais, he has already discussed (and translated!) some admired verse writers by the time he devotes Letters XXI and XXII to Rochester, Waller, Pope, and ‘some other Famous Poets’. Shakespeare and Dryden appear in Letter XVIII on tragedy, but Voltaire considers them by his own admission on their merits as poets, not plotters, saying ‘’Tis in these detach’d Passages that the English have hitherto excell’d’. In these later letters, however, Voltaire considers non-dramatic verse.

Letter XXI features two poets of the previous century who were already known in France: John Wilmot, Earl of Rochester, and Edmund Waller. Rochester is today more infamous for his debauchery than he is famous for his poetry, but Voltaire considers him a ‘Man of Genius’ and ‘great poet’ for his Satyr Against Mankind. Waller similarly lives on more in history books than anthologies. A fervent royalist, he plotted against Parliament in 1643 and was locked away in the Tower of London for a time, but survived the Civil Wars and continued his parliamentary career thereafter. As to his verse, posterity seems to have shared Voltaire’s assessment that Waller was not ‘a finish’d Poet’, and he is little read today. 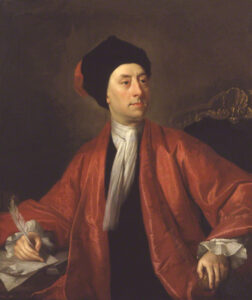 Letter XXII sees Voltaire in expository mode, serving as a herald of that which had not yet crossed the Channel. He mentions but does not dwell on Matthew Prior, who is seen now as a transitional figure in British poetry between the Restoration period and the early eighteenth-century luminaries such as Pope. Voltaire says more about Hudibras, a mock-heroic satire about the Civil Wars by Samuel Butler. ‘I never before found so much Wit in one single Book’, he says, and in a later edition of the Lettres adds some passages translated into French from this ‘most difficult to [translate]’ poem.

Alexander Pope was an important figure for Voltaire. The two shared philosophical interests, a classical outlook, and a taste for translation. They met and corresponded during Voltaire’s time in England, the years of which marked the midpoint of Pope’s major output. He had already published The Rape of the Lock and the Essay on Criticism, as well as a wildly successful translation of Homer, all of which Voltaire mentions at different points in the Lettres. Yet to come were the satirical Dunciad, in which contemporary literary figures were mercilessly lampooned, and the philosophical Essay on Man. Pope is notable for discussing subjects that might more naturally be treated in prose, such as aesthetic theory in the Essay on Criticism, in a characteristically clear and lively verse.

Voltaire also discusses Swift, a close friend of Pope’s and a co-founder with him and other writers of the Scriblerus club. Swift was an Irish cleric whose biting satires were informed by his involvement in Whig and later Tory politics. He is best known today for his fanciful Gulliver’s Travels, in which the hapless traveler Gulliver encounters a number of extraordinary civilisations, including the miniature Lilliputians. Many of his satires included a fanciful streak, and it is this aspect of his work, paired with his status within the Church, that lead Voltaire to compare him to François Rabelais, the fifteenth-century monk who wrote about the bizarre adventures of the giants Gargantua and Pantagruel.

Voltaire seems to focus on poets whose work had some notable resemblance to his own. Butler’s Hudibras has parallels to Voltaire’s Henriade in its subject drawn from recent history and its message of religious toleration, and Voltaire points out its hostility to the Clergy. Pope’s philosophical subject-matter and formal sophistication held an obvious appeal, and Swift’s pointed satires prefigure Voltaire’s later efforts in that genre. His omissions are also telling. Remarkably, he makes no mention of John Milton, who was considered a hugely important figure, as indeed he still is. One may in fact wonder to what extent Voltaire chose to discuss certain authors simply because he wanted to translate them – either as a writerly challenge or an excuse to publish contentious ideas – rather than as part of an overview of England’s literary scene.