There are several common threads running through Voltaire’s descriptions of the reigns of four of the most famous Holy Roman Emperors: 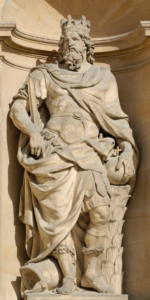 Early eighteenth-century statue of Charlemagne found on the façade of the Dôme des Invalides in Paris.

Memorable for: being the first Holy Roman Emperor.

Voltaire begins fairly positively, describing how Charlemagne organised his kingdom by splitting it between three deputies and making treaties with neighbouring countries, all while displaying a ‘natural good sense’ (Œuvres complètes de Voltaire, vol.44A, p.296). However, in keeping with Voltaire’s polemical tendencies, the narration takes a sharp left turn in the final paragraph, where he concludes that ‘this monarch was at heart like all other conquerors, a usurper’ [‘ce monarque au fond était comme tous les autres conquérants, un usurpateur’] (p.305).

Voltaire ends with one of his signature scathing turns of phrase, offering the remark that ‘we know about his bastards, his bigamy, his divorces, his concubines: we know he had thousands of Saxons murdered, and we have made him a saint’ [‘on connait ses bâtards, sa bigamie, ses divorces, ses concubines: on sait qu’il fit assassiner des milliers de Saxons, et on en a fait un saint’] (p.305). This remarkable and sudden change in tone demonstrates how, even when commenting on distant history, Voltaire cannot resist bringing his polemical agenda to the fore. As in all his historical works, the Annales is full of moments where Voltaire uses past events to expose present-day hypocrisy and intolerance, in this case the widespread idolisation by eighteenth-century Christians of Charlemagne, a sinful, murderous usurper. 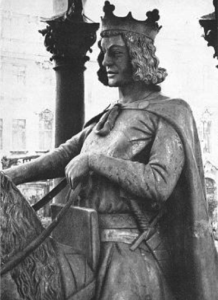 Statue of the Magdeburg Rider, thought to be Otto I (Magdeburg).

Voltaire begins his narration with the declaration of ‘Finally, here we have a real emperor’ [‘Voici enfin un empereur véritable’] (p.417). When we find out what Otto did during his long reign, this statement is rapidly revealed to be ironic. Voltaire characterises the twelfth Holy Roman Emperor as a warmongering tyrant who is only remembered as being ‘great’ because he re-established Charlemagne’s empire in Italy through violent means. In fact, Voltaire says he resembles an inferior version of Charlemagne, falling short of his self-assigned role as natural successor to the first emperor.

We see a distinct argument developing in Voltaire’s narrative so far: ‘in the greatest States the nation has almost always been sacrificed to the interests of a single man, or a group of men’ [‘dans les plus grands Etats la nation a presque toujours été sacrifiée aux intérêts d’un seul homme, ou de quelques hommes’] (p.419-20). As the stories of Otto and Charlemagne demonstrate, glory through conquest might cause an emperor to be remembered as a great ruler, but it will almost certainly be to the detriment of the ordinary people living in the territories ruled by that emperor. 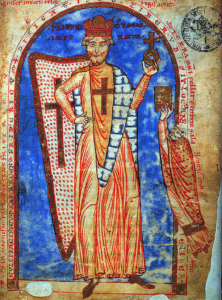 Frederick I as Crusader. Illustration from Robert the Monk’s ‘Historia Hierosolymitana’ (1188).

Memorable for: going on a Crusade at the age of sixty-eight.

Voltaire’s discussion of Frederick’s reign allows him to confront fanaticism head-on. He bookends his narrative with an act of peace and an act of war, beginning with a short tale of how Frederick’s first action was to successfully arbitrate a territorial dispute in Denmark. Like Charlemagne’s reign, these promising beginnings are soon reversed. Frederick’s reign ends with his death on the Third Crusade, a topic first tackled by Voltaire in his 1750 publication of the Histoire des croisades, which would later form part of the Essai sur les mœurs (see Henri Duranton, ‘L’Histoire des croisades de Voltaire’, OCV, vol.23, p.xlix-lxiv). It is clear from this section of the Annales that his negative opinions of the Crusades had not softened since then. He is firmly on Saladin’s side, describing him, not Frederick, as ‘the greatest man of his time’ (OCV, vol.44B, p.118). He disdainfully writes of how Frederick sent one of his counts to formally demand the return of Jerusalem and the True Cross from Saladin, before adding ‘that true cross was without doubt a false relic; and that Jerusalem was a poverty-stricken city: but it was necessary to flatter the people’s absurd fanaticism’ [‘cette vraie croix était incontestablement un très fausse relique; et cette Jérusalem était une ville très misérable: mais il fallait flatter le fanatisme absurde des peuples’] (p.118).

Ironically, the first enemies fought by Frederick’s band of crusading Christians were… more Christians, who had come from Constantinople and had a long-standing rivalry with the Holy Roman Empire. The ageing emperor died of illness while on Crusade, and Voltaire concludes by saying how, for such a supposedly great man, we don’t even know where he is buried. Frederick’s story sends a clear and pointed message to eighteenth-century rulers: those who indulge fanaticism will end up harming their own people and their remains will be lost in a pointless war. 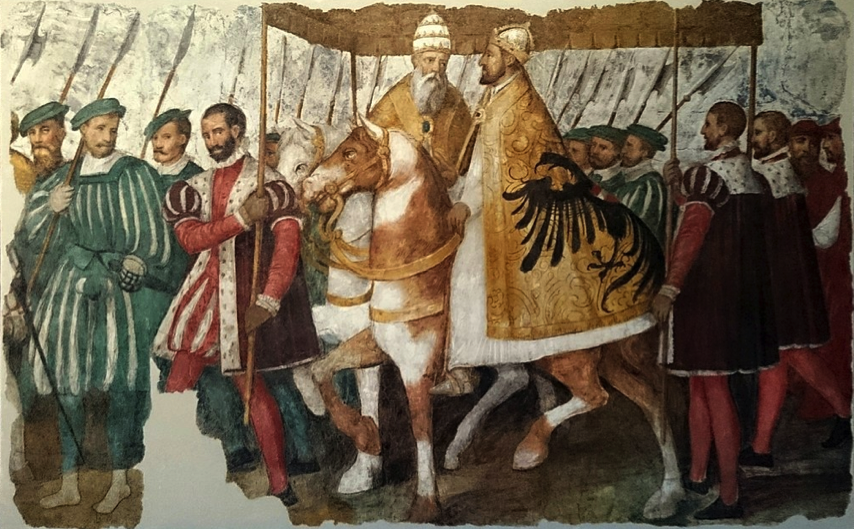 ‘Pope Clement VII and Emperor Charles V on horseback under a canopy’, Jacopo Ligozzi (c.1580). Depicts Charles and the Pope arriving in Bologna before the latter’s coronation.

On 6 May 1521, Charles signed the Edict of Worms, officially condemning Martin Luther and his Protestant followers as heretics. The princes of the Holy Roman Empire were collectively commanded to pursue the imprisonment of the Lutherans. As well as this landmark act of religious intolerance, Charles’s reign was marked by so many wars that he had to ask for money from Henry VIII, despite being, in Voltaire’s words, ‘the most powerful emperor since Charlemagne’ (ch.41, OCV, vol.44C, p.68). It is clear that this should be thought of as a great humiliation for Charles, especially given the author’s low opinion of the English king.

Once again, we find the familiar narrative of a powerful king who runs his kingdom into ruin with never-ending war. On the other hand, Voltaire is unafraid to criticise elements of the Reformation, particularly Anabaptists Storch and Müntzer, who both went ‘further than Luther’, appointing themselves as ‘prophets’ and leading a battle against Frederick of Saxe (ch.41, OCV, vol.44C, p.76, 78). Voltaire remarks that ‘in vain the two prophets sing hymns in the name of the Lord. These fanatics are completely defeated’ [‘En vain les deux prophètes entonnent des cantiques au nom du Seigneur. Ces fanatiques sont entièrement défaits’] (ch.41, OCV, vol.44C, p.78). For all his power and bluster, Charles’s reign ends anticlimactically, forced to accept the Peace of Augsburg, which granted religious freedom to the Lutherans, then abdicating due to physical frailty.