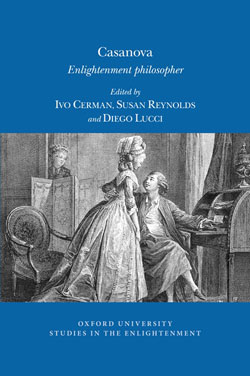 The stereotype of Casanova as a promiscuous and unscrupulous lover has been so pervasive that generations of historians have failed to take serious account of his philosophical legacy. This has recently changed, however, as the publication of the definitive edition of his memoirs and the majority of his longer treatises has heralded a surge of interest in the writer. This book constitutes an interpretive turn in Casanova studies in which the author is positioned as a highly perceptive and engaged observer of the Enlightenment.
Drawing primarily on Casanova’s large body of manuscripts and lesser-known works, the contributors reveal a philosopher whose writings covered topics ranging from sensual pleasure to suicide. Analysing Casanova’s œuvre from the perspective of moral philosophy, contributors show how several of his works – including his historical writings and satirical essays on human folly – contribute to the Enlightenment quest for a secular morality. A major feature of this book is the first English annotated translation of Federico Di Trocchio’s seminal article ‘The philosophy of an adventurer’, which paved the way for a re-evaluation of Casanova as a serious philosopher. In subsequent chapters contributors uncover the Italian context of Casanova’s anticlericalism, analyse the sources of his views on suicide and explore the philosophical dialogues contained in his recently published manuscripts. Casanova: Enlightenment philosopher marks a turning point in literary and philosophical studies of the eighteenth century, and is an indispensable resource for analysing and interpreting the work of this previously overlooked Enlightenment thinker.