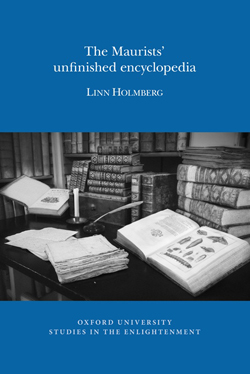 In this groundbreaking study, Linn Holmberg provides new perspectives on the Enlightenment ‘dictionary wars’ and offers a fascinating insight into the intellectual reorientation of a monastic community in the Age of Reason.

In mid-eighteenth-century Paris, two Benedictine monks from the Congregation of Saint-Maur – also known as the Maurists – began working on a universal dictionary of arts, crafts, and sciences. At the same time, Diderot and D’Alembert started to compile the famous Encyclopédie. The Benedictines, however, never finished or published their work and the manuscripts were left, forgotten, in the monastery archive. In the first study devoted to the Maurists’ unfinished encyclopedia, Holmberg explores the project’s origins, development, and abandonment and sheds new light on the intellectual activities of its creators, the emergence of the encyclopedic dictionary in France, and the Encyclopédie of Diderot and D’Alembert.

Holmberg adopts a multidisciplinary approach to the challenges of studying a hitherto unexplored and incomplete manuscript. By using codicology and handwriting analysis, the author reconstructs the drafts’ order of production, estimates the number of compilers and the nature of their work, and detects comprehensive editorial interferences made by nineteenth-century conservators at the Bibliothèque nationale de France. Holmberg’s meticulous work proves, with textual evidence, the Maurist dictionary’s origins as an augmented translation of a mathematical dictionary by Christian Wolff. Through comparing the Maurists’ manuscripts to the Encyclopédie and the Jesuits’ Dictionnaire de Trévoux, the author highlights striking similarities between the Benedictine project and that of Diderot and D’Alembert, showing that the philosophes were neither first with their encyclopedic innovations, nor alone in their secular Enlightenment endeavours.

1. Introduction
Reasons for studying an unfinished encyclopedia
The discovery of the manuscripts, and earlier research
2. The Maurists’ manuscripts under the loupe
The history of the physical documents
Determining the number of writers
3. The history of a dictionary in the making
The Congregation of Saint-Maur: organisation and erudition
Dom Pernety revisited
The dictionary project: picking up the trail
The first phase: translating Wolff’s lexicon (c.1743-1747)
Competition with the embryonic Encyclopédie (1746)
Turning point: interruption and transformation (c. 1747)
The second phase: continuation and abandonment (c.1747-1754/1755)
4. The Maurists’ manuscripts compared
Establishing limits: comparison to the Dictionnaire de Trévoux
Creating clusters of knowledge: comparison to the Encyclopédie
Other aspects of order: classification and cross-references
Identifying the Maurists’ sources
Mechanical arts and crafts
Natural history
Medical arts
Mathematical sciences
5. The Maurist enterprise and Enlightenment thought
A monastic community in transformation
Responding to the tastes of the time
The middle ground that could have been
Conclusion: ‘To change the way people think’
Appendix 1: nomenclature
Appendix 2: working lists
Appendix 3: illustrations
Appendix 4: fields of knowledge
Appendix 5: transcriptions and translations
Bibliography
Index