Peripheries of the Enlightenment 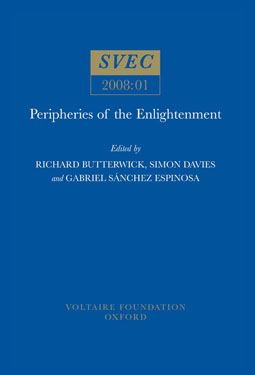 ‘Enlightenment’ is a universal concept, but its meaning is most clearly revealed by seeing how it was engaged with, reconfigured or rejected, on a local level. Peripheries of the Enlightenment seeks to rethink the ‘centre/periphery’ model, and to consider the Enlightenment as a more widely spread movement with national, regional and local varieties, focusing on activity as much as ideas.

The debate is introduced by two chapters which explore the notion of periphery from vantage points at the very heart of ‘enlightened’ Europe: Ferney and Geneva. Through thirteen ensuing chapters, the interaction between ‘Enlightenment’ and ‘periphery’ is explored in a variety of spatial and temporal contexts ranging from Mexico to Russia. Drawing on urban and provincial as well as national case studies, contributors argue that we can learn at least as much about the Enlightenment from commentators at the geographical and cultural borders of the ‘enlightened’ world as from its most radical theorists in its early epicentres.

Crossing the boundaries between histories of literature, religion, science and political and economic thought, Peripheries of the Enlightenment is not only international in its outlook but also interdisciplinary in its scope, and offers readers a new and more global vision of the Enlightenment.

The strength of this book lies in the excellent quality of the individual studies and in the diversity of the experiences of the Enlightenment which it offers, stripping away the barriers created by linguistic, political and cultural divisions.

[…] this is a rich and thought-provoking collection. Butterwick’s hope that he can ‘persuade dix-huitiémistes that study of the peripheries of the Enlightenment yields insights into the movement as a whole’ (p.16) is well founded.