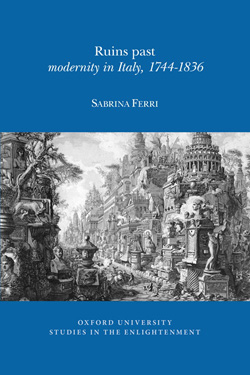 In an era haunted by its past, modern Europe sought to break with the old; the future and the new became the ideal. In Italy however, where the remains of the past dominated the landscape, ruins were a token both of decadence and of the inspiring legacy of tradition. Sabrina Ferri proposes a counter-narrative to the European story of progress by focusing on the often-marginalized and distinctive case of Italy.
For Italians, ruins uncovered the creative potential of the past, transforming it into an inexhaustible source of philosophical speculation and poetic invention whilst simultaneously symbolizing decay, loss and melancholy. Focusing on the representation of ruins by Italian writers, scientists, and artists between the mid-eighteenth and early nineteenth centuries, Sabrina Ferri explores the culture of the period and traces Italy’s complex relationship with its past. Combining the analysis of major works, from Vico’s New science to Leopardi’s Canti, with that of archival sources and little-studied materials such as scientific travel journals, letters, and political essays, the author reveals how:
• the ruin became a figure for Italy’s uneasy transition into modernity;
• the interplay between reflections on the processes of history and speculations on the laws of nature shaped the country’s sense of the past and its vision of the future;
• the convergence of narratives depicting historical and natural change influenced both the creative arts and the emerging sciences of geology, biology, and archaeology;
• the temporal crisis at the dawn of the nineteenth century called into question traditional models for investigating the past and understanding the present.

List of illustrations
Acknowledgments
Introduction
1. ‘The great fragments of antiquity’: ruins and recovery of the past in Giambattista Vico’s New science
2. ‘The ruined cities lie desolate’: natural catastrophe and historical change in eighteenth-century Italy
3. Time of nature, time of man: ruins and the materiality of the historical imagination
4. Melancholies of the modern: nature and history in the late eighteenth-century Picturesque
5. The ghostly ruins of Neoclassicism: Alessandro Verri’s Roman nights and the posthumous life of the ancient
6. The shipwrecks of time: Giacomo Leopardi’s poetics of ruins
Epilogue: a glance back
Bibliography
Index