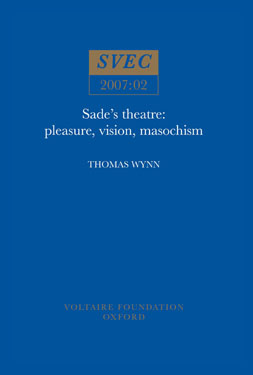 Challenging the assumption that the gaze is sadistic, the author uses insights from film theory to argue that Sade adapts contemporary theatrical texts and practice to create an aesthetic distinct from that of his novels. Rather than replicate the style of such works as Les Cent vingt journées de Sodome, Sade’s drama anticipates a masochistic model, as theorised by Theodor Reik and Gilles Deleuze. This analysis of Sadean spectatorship takes a thematic rather than chronological or text-by-text approach. The author argues that Sade, as an atheist materialist, focuses on the structural elements of theatre to produce visual pleasure rather than moral improvement, and that he elaborates an insistently visual dramatic aesthetic, a mode analogous to the linguistic saturation of the novels’ tout dire.

With reference to eighteenth-century obscene drama, theatre architecture and the history of visuality, the author explores the paradox that Sade’s theatre is meant not for the stage, but for the private imagination. His visionary theatre is an example of the late eighteenth-century sublime, an aesthetic of the ineffable and the unrepresentable which, in its emphasis on the survival of the demeaned individual, structurally resembles masochism.

Without deforming his technique or strategy, the author shows that Sade’s voluptuous theatre – like his fiction – addresses an individual whose sovereignty in a godless world is intimately linked to the independent imagination. This book will be of interest to all those working in eighteenth-century drama and theory of spectatorship.

After studying at the University of Cambridge, Thomas Wynn completed his DPhil in French at St John’s College, Oxford in 2004. As well as teaching at the Ecole normale supérieure in Paris, he has also been a post-doctoral fellow at Lincoln College, Oxford. He has published on Sade, cinema and eighteenth-century theatre, as well as contributing to the Complete works of Voltaire. His edition of Hénault’s François II will be published shortly with the MHRA.

What is striking in this monograph it its richness of documentation combined with Gallic methodological rigour […] drawing on bibliography, publishing history, lexicology and discourse analysis. […] This is an important and stimulating work of scholarship which is essential reading for all those interested in French print culture of the eighteenth century.

In addition to the rich array of eighteenth-century sources evoked, this book is especially strong in its discussion of the limits of visual drama, in particular the way in which the ‘obscene’ functions as an oppositional construct that presupposes the prevailing code of bienséance.