Technology has enabled the twenty-first century craze for the selfie, but it would be a mistake to identify the motivation behind this impulse as a purely modern one. Having your portrait painted was a PR exercise – an opportunity to control your image and the way your friends, enemies, and subordinates viewed you. Portraits celebrated key moments in your life, your successes, your progeny, and your prowess at your hobbies, just as our Facebook profiles do today.

Louis XIV understood the power of the image, as the enormous variety of portraits of him illustrates. His finance minister, Colbert, was put in charge of the Académie royale de peinture et de sculpture (Royal Academy of Painting and Sculpture) in order to develop and promote an official stylistic school. The focus was on neoclassical themes borrowed from Greek and Roman mythology, and the aesthetic was clean, ordered, anatomically realistic, and often monumental in scale, in keeping with Louis XIV’s vision of a France governed by a capable absolute monarch.

This portrait of Louis XIV in his coronation robes, by Hyacinthe Rigaud, is an emblematic depiction of an absolute monarch, designed to present the King as the embodiment of royal power. When Mazarin died in 1661, Louis shocked the court by announcing that henceforward he would rule himself, with no chief minister. After the upheavals of his childhood and adolescence, when the country came close to civil war following the uprisings by parliaments and nobles during the Fronde, Louis’ declaration inaugurated an era of absolute monarchy. The painting shows off the famous red heels, the magnificent robes of state, embroidered with the fleur de lys of the royal family, as well as the symbols of power: the prominent sword, the sceptre and the crown. Read here about the regimented daily routine of the court, which kept the leading nobility at Versailles, dancing ritual attendance on the king, rather than in their provinces fermenting rebellion.

As well as proclaiming the king’s absolute power, the Rigaud portrait hints at another side to the king: in particular, his muscular legs are on display as if to suggest vitality and readiness for action. This element of his pose also points to another side to the Sun King: his passion for dance. Louis XIV danced in ballets from a young age. Henry Gissey’s sketch of Louis XIV in costume as Apollo for the Ballet de la nuit (1653), which he danced at the age of 14, gives a taste of the opulence of his reign. The King’s fascination with Apollo, the Greek god of the arts and of healing, lasted throughout his life – in a sense, he viewed himself as modern-day incarnation of the classical deity, even adopting Apollo’s sun emblem. In this miniature, he is depicted as Apollo driving his sun chariot and holding a lyre to indicate his patronage of the arts.

In chapter 26 of the Siècle de Louis XIV, Voltaire tells the story of when, at the age of 32, Louis XIV gave up dancing in public. During a performance of Racine’s Britannicus, he was apparently struck by a character’s suggestion that Nero demeaned his imperial dignity by taking part in chariot races, offering himself as a ‘spectacle’ to his Roman subjects. From then on, Voltaire tells us, Louis never again danced on stage and ‘the poet reformed the monarch’. 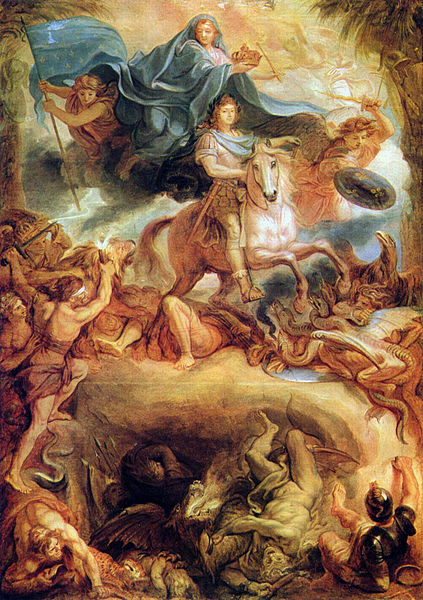 As well as being depicted in the guise of Apollo, Louis XIV commemorated his many military victories by posing as an all-conquering Jupiter, as can be seen in this tapestry. However, even Louis XIV was not immune to criticism. In Chapter 28 of the Siècle de Louis XIV, Voltaire recounts that the King faced accusations of overweaning pride when a Classical-style statue of him in the Place des Victoires in Paris appeared to depict slaves in chains around its base. The statue was not commissioned by Louis XIV, but by one of his marshals, La Feuillade, and the figures were in fact supposed to represent ‘tamed vices’ and ‘defeated nations’. Nevertheless, this episode indicates the importance of public image in a time without the photography and mass media we have today – the French general public’s only way of visualizing the king would have been to look at statues of him. Even the French Apollo had to tread the fine line between using visual representations to remind his subjects of his absolute power, and stirring up resentment by appearing too arrogant.

Louis XIV was the patriarch of a large family of heirs, both legitimate and illegitimate: it was sadly ironic, then, that at his death there should have been real fears of a succession crisis.

This famous family portrait shows the line of the Bourbon succession, from the busts of Henri IV and Louis XIII in the background. The Sun King takes centre stage flanked by his son the Dauphin (known as Monseigneur) and the duc de Bourgogne, his grandson in red. Since both men died before the King, the baby duc d’Anjou whose hand reaches out to clasp his great-grandfather’s became the King’s heir, the future Louis XV. They are accompanied by Mme de Ventadour, the formidable governess of the duc d’Anjou, who commissioned the portrait to commemorate her own role in saving the infant duke’s life and securing the Bourbon succession during the measles epidemic in which his parents and elder brother perished.

Children were particularly precious in the 17th century, as infant death rates were extremely high. Louis XIV had six legitimate children. Only one, the Dauphin, survived to adulthood. The king and queen were particularly affected by the death of the five-year old Madame Royale in 1672. However, Louis XIV was also known for his many mistresses, and many illegitimate children. These children were far from sidelined. The King recognized them and treated them with great affection. They were welcomed at court, educated and materially provided for, and many married into the royal line.

This quirky wax model of Louis XIV may appear somewhat unflattering to modern eyes, but it highlights the King’s interest in new technologies and scientific processes. Our fascination with human simulacra, still a hot topic in the modern-day debate about artificial intelligence, began in the 17th century, with models like these.

In a rather more unexpected role, in this painting from the Abbey of St Riquier in northern France, Louis XIV can be seen laying his hands on people infected with scrofula. This aspect of the Sun King highlights the tradition by which the French king ruled by divine right, and received special divine favour, including the ability to heal scrofula by his royal touch. This ritual was even part of the French coronation ceremony at the cathedral in Reims.