Ancients and Moderns in Europe 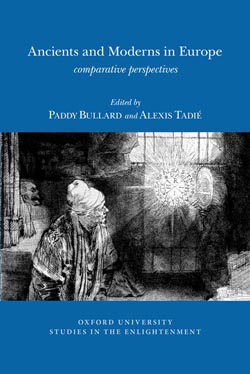 The Querelle des Anciens et des Modernes, or Battle of the Books as it was known in England, famously pitted the Ancients on the one side and the Moderns on the other. This book presents a new intellectual history of the dispute, in which authors explore its manifestations across Europe in the arts and sciences, from the sixteenth to the eighteenth centuries.

By paying close attention to local institutional contexts for the Querelle, contributors yield a complex picture of the larger debate. In intellectual life, authors uncover how the debate affected the publication of antiquarian scholarship, and how it became part of discussions in London coffee houses and the periodical press. Authors also position the Low Countries as the true pivot for a modernistic realignment of intellectual method, with concomitant rather than centralised developments in England and France. The volume is particularly concerned with the realisation of the Querelle in the realm of artistic and technical practice. Marrying modern approaches with ancient sympathies was fraught with difficulties, as contributors attest in analyses on musical writing, painting and the ‘querelle du coloris’, architectural practice and medical rhetorics. Tracing the deeper cultural resonances of the dispute, authors conclude by revealing how it fostered a new tendency to cultural self-reflection throughout Europe. Together, these contributions demonstrate how the Querelle acted as a leading principle for the configuration of knowledge across the arts and sciences throughout the early modern period, and also emphasise the links between historical debates and our contemporary understanding of what it means to be ‘modern’.
Paddy Bullard and Alexis Tadié, Introduction
Part I: Ancient knowledge and modern mediations
1. Vittoria Feola, The Ancients with the Moderns: Oxford’s approaches to publishing ancient science
2. Alexis Tadié, Ancients, Moderns and the language of criticism
3. Stéphane Van Damme, Digging authority: archaeological controversies and the recognition of the metropolitan past in early eighteenth-century Paris
Part II: Logic and criticism across borders
4. Martine Pécharman, From Lockean logic to Cartesian(ised) logic: the case of Locke’s Essay and its contemporary controversial reception
5. Marcus Walsh, Scholarly documentation in the Enlightenment: validation and interpretation
6. Karen Collis, Reading the Ancients at the turn of the century: the third Earl of Shaftesbury (1671-1713) and Jean Le Clerc (1657-1736)
Part III: Conversing with the Ancients: arts and practices
7. Théodora Psychoyou, Ancients and Moderns, Italians and French: the seventeenth-century quarrel over music, its status and transformations
8. Elisabeth Lavezzi, Painting and the tripartite model in Charles Perrault’s Parallèle des Anciens et des Modernes
9. Paddy Bullard, John Evelyn as modern architect and ancient gardener: ‘Lessons of perpetual practice’
10. Sylvie Kleiman-Lafon, Ancient medicine, modern quackery: Bernard Mandeville and the rhetoric of healing
Part IV: The persistence of the Quarrel
11. Amedeo Quondam, Petrarch and the invention of synchrony
12. Karin Kukkonen, Samuel Richardson among the Ancients and Moderns
13. Ourida Mostefai, Finding ancient men in modern times: anachronism and the critique of modernity in Rousseau
14. Ritchie Robertson, Ancients, Moderns and the future: the Querelle in Germany from Winckelmann to Schiller
Summaries
Biographies of contributors
Bibliography
Index

‘this volume makes a valuable contribution to scholarship on the Ancients and Moderns debate. In shifting attention away from the more polemical episodes of the dispute and moving beyond national perspectives, it sheds light on the long-term impacts of comparisons between antiquity and modernity on European intellectual life, particularly its impact on the development of disciplinary practices in various fields.’