Enlightenment and religion in the Orthodox world 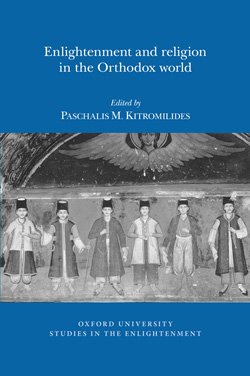 The place of religion in the Enlightenment has been keenly debated for many years. Research has tended, however, to examine the interplay of religion and knowledge in Western countries, often ignoring the East. In Enlightenment and religion in the Orthodox world leading historians address this imbalance by exploring the intellectual and cultural challenges and changes that took place in Orthodox communities during the eighteenth century.

The two main centres of Orthodoxy, the Greek-speaking world and the Russian Empire, are the focus of early chapters, with specialists analysing the integration of modern cosmology into Greek education, and the Greek alternative ‘enlightenment’, the spiritual Philokalia. Russian experts also explore the battle between the spiritual and the rational in the works of Voulgaris and Levshin. Smaller communities of Eastern Europe were faced with their own particular difficulties, analysed by contributors in the second part of the book. Governed by modernising princes who embraced Enlightenment ideals, Romanian society was fearful of the threat to its traditional beliefs, whilst Bulgarians were grappling in different ways with a new secular ideology. The particular case of the politically-divided Serbian world highlights how Dositej Obradović’s complex humanist views have been used for varying ideological purposes ever since. The final chapter examines the encroachment of the secular on the traditional in art, and the author reveals how Western styles and models of representation were infiltrating Orthodox art and artefacts.

Through these innovative case studies this book deepens our understanding of how Christian and secular systems of knowledge interact in the Enlightenment, and provides a rich insight into the challenges faced by leaders and communities in eighteenth-century Orthodox Europe.

Paschalis M. Kitromilides, Preface
Paschalis M. Kitromilides, 1. The Enlightenment and the Orthodox world: historiographical and theoretical challenges
Vassilios N. Makrides, 2. The Enlightenment in the Greek Orthodox East: appropriation, dilemmas, ambiguities
Efthymios Nicolaidis, 3. The Greek Enlightenment, the Orthodox Church and modern science
Dimitrios Moschos, 4. An alternative ‘enlightenment’: the Philokalia
Iannis Carras, 5. Understanding God and tolerating humankind: Orthodoxy and the Enlightenment in Evgenios Voulgaris and Platon Levshin
Elena Smilianskaia, 6. The battle against superstition in eighteenth-century Russia: between ‘rational’ and ‘spiritual’
Andrei Pippidi, 7. The Enlightenment and Orthodox culture in the Romanian principalities
Nenad Ristović, 8. The Enlightenment of Dositej Obradović in the context of Christian classical humanism
Marija Petrović, 9. The Serbian Church hierarchy and popular education in the Hapsburg lands during the eighteenth century
Bojan Aleksov, 10. The vicissitudes of Dositej Obradović’s Enlightenment cult among the Serbs
Vassilis Maragos, 11. The challenge of secularism in Bulgarian Orthodox society
Eugenia Drakopoulou, 12. The interplay of Orthodoxy and Enlightenment in religious art
Summaries
Bibliography
Index