Representing private lives of the Enlightenment 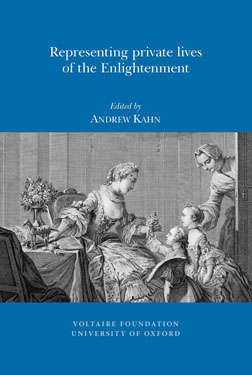 What constituted the ‘private’ in the eighteenth-century? In Representing private lives of the Enlightenment authors look beyond a simple equation of the private and the domestic to explore the significance of the individual and its constructions of identity and environment.
Taking case studies from Russia, France, Italy and England, specialists from a range of disciplines analyse descriptions of the private situated largely outside the familial context: the nobleman at the theatre or in his study, the woman in her boudoir, portraitists and their subject, the solitary wanderer in the public garden, the penitent at confession. This critical approach provides a comparative framework that simultaneously confirms the Enlightenment as a pan-European movement, both intellectually and socially, whilst uncovering striking counterpoints. What emerges is a unique sense of how individuals from different classes and cultures sought to map their social and domestic sphere, and an understanding of the permeable boundaries separating private and public.

‘…this new collection, while unavoidably in dialogue with its illustrious predecessor, brings a freshness to the subject that moves away from the traditional view of “private” as domestic and so in opposition to the public sphere, towards a whole series of alternative definitions of privacy and individuality.’

‘…a lively and engaging work that deserves an important place in contemporary social studies of European bourgeois culture.’