Satire, prints and theatricality in the French Revolution 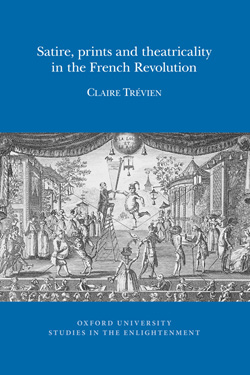 The Revolutionary era was a period of radical change in France that dissolved traditional boundaries of privilege, and a time when creative experimentation flourished. As performance and theatrical language became an integral part of the French Revolution, its metaphors seeped into genres beyond the stage. Claire Trévien traces the ways in which theatrical activity influenced Revolutionary print culture, particularly its satirical prints, and considers how these became an arena for performance in their own right.

Following an account of the historical and social contexts of Revolutionary printmaking, the author analyses over 50 works, incorporating scenes such as street singers and fairground performers, unsanctioned Revolutionary events, and the representation of Revolutionary characters in hell. Through analysing these depictions as an ensemble, focusing on style, vocabulary, and metaphor, Claire Trévien shows how prints were a potent vehicle for capturing and communicating partisan messages across the political spectrum. In spite of the intervening centuries, these prints still retain the power to evoke the Revolution like no other source material.

‘Claire Trévien’s interdisciplinary exploration of the political and visual terrain between the stage and satirical prints in the French Revolution is both imaginative and path-breaking. It opens up new perspectives on the confluence of some of the most striking visual expressions of Revolutionary culture.’
Colin Jones, Queen Mary University of London

List of illustrations
List of abbreviations
1. Introduction: the other stage of the French Revolution
Revolutionary prints: a brief historiography
Theatricality and prints
2. Singing the scene: chansons and images in prints
The case of Bonvalet (1788-1789)
The aftershocks of 1789
Multiple voices (1791-1792)
Songs and martyrdom (1793-1794)
Epilogue
3. Le monde à l’envers: the carnivalesque in prints
The commedia dell’arte in Revolutionary prints
Individual actors
Epilogue
4. The spectacle of science: illusion in prints
Charlatanism and theatricality (1784-1795)
Spellbound science (1789-1790)
Spectator and performer (1791-1792)
Science as a propaganda tool (1794)
Epilogue
5. Théâtre de l’ombre: visions of afterlife in prints
Setting the stage
Executing theatre
Lighting shadows
Epilogue
6. Conclusion
Bibliography
Index