a sense of history 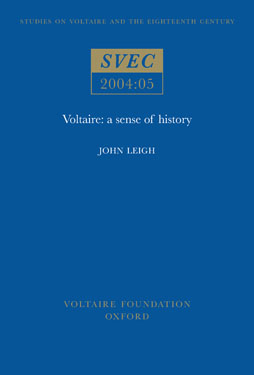 It was not only in his histories that Voltaire thought, worried and wrote about history. In fact, many of Voltaire’s most provocative and tantalising remarks on history lie outside the province of the so-called Œuvres historiques, in the vast expanses of his complete works, and historical events and historical figures elicit some of his most imaginative writing. Voltaire’s propensity to write about history in works that are not histories sheds new light on his historiographical thought and temper. The historian that emerges from these pages is, by turns, a feverish, bed-ridden man haunted by the St Bartholomew massacre (an overwhelming preoccupation of Voltaire’s, although it receives only cursory attention in the prose histories) an inspired poet mythologising Henri IV’s epic adventures, a bawdy satirist amused by Joan of Arc, a raconteur nourished by historical anecdotes, even a doting uncle winking at his niece as he elaborates a philosophy of history. In all these forms and at all these times, an interest in history is integral and abiding.
Far from being marginal or oblique, these works yield important insights into a pervasive Voltairean sense of history which finds in these different forms both the freedoms and the traditions – and indeed often the readers – denied to the Œuvres historiques. Moreover, innovative works like the Henriade and Candide, which fall into this category, prove as influential to historians as Voltaire’s recognised histories. Voltaire’s prodigious energy and versatility in fields other than history have probably harmed his reputation as a historian when, already in the eighteenth century, historians were increasingly expected to be specialists. This study shows that Voltaire’s historiographical thought ranges across areas and texts artificially sundered by subsequent editorial compartmentalisations, and it reveals a restlessly complex, inventive writer confronting history in numerous different guises.