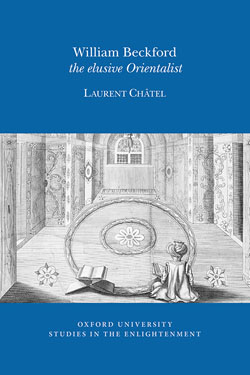 The writer and aesthete William Beckford (1760-1844) was a fascinating embodiment of the sublime egotist. Because of his extravagance, fabulousness and enigmatic nature, biographers have alternately presented him as an object of fascination or dismissed him as an insolent and deceptive character. Laurent Châtel provides an innovative reassessment of Beckford by presenting ‘elusiveness’ as the defining motif for understanding both the writer and his work.

Laurent Châtel opens his analysis by exploring the author’s fascination for the East, which informed several of his multi-layered works such as ‘The long story’, ‘Suite des contes arabes’ and Vathek. By reconnecting him with the eighteenth-century aesthetic of translation and reappropriation of the Arabian nights, Châtel shows how Beckford’s Orientalism was key to his elusiveness and presents him as a fabulist who supplemented existing tales with touches of wonder and horror. In further chapters Châtel explores his lack of recognition as a man of letters – whether desired or not. Through an analysis of the arguably limited reception of Beckford’s works, in particular in France both during his lifetime and immediately after his death, we see how his deliberate elusiveness of style was constitutive of his identity. In his groundbreaking repositioning of Beckford, Laurent Châtel provides a new framework for further explorations of his work and their rich overlay of intertextual presences.

‘Laurent Châtel engages perceptively with the shifting borders of translation, revisioning, interpretation and imitation, in ways that illuminate continuing issues around Orientalist scholarship. This is an admirable, luxuriantly detailed and most rewarding study.’
Marina Warner, author of Stranger magic: charmed states and the ‘Arabian nights’