From powerful cardinals and brilliant military strategists to canny ministers and eccentric monarchs – throughout his life, Louis XIV was surrounded and influenced by some of the most colourful characters in European history.

The French blog ‘Favorites royales’ is dedicated to the women of the French court – the real power behind the throne throughout the history of the French monarchy, including during the reign of Louis XIV.

Who was the Man in the iron mask?

The shadowy figure of the Man in the Iron Mask, imprisoned on secret orders for over 30 years, moved from place to place and forced to wear a mask, has captured the imagination of generations. Some suggested that he was Louis XIV’s older illegitimate brother or even his real father; in Alexandre Dumas’s fictional account he is his secret twin. Other candidates include an Italian diplomat, or a valet of Mazarin’s who had been privy to his master’s financial transgressions.

Voltaire interrogates the myth in chapter 25 of the Siècle de Louis XIV (an English translation can be found here, p.88-90). Although he does not come to any conclusions regarding his identity, he treats the figure of the prisoner with factual precision rather than speculation: he is described as being ‘of above-average height, young and of the finest and most noble figure’ but with his face permanently covered by a mask. Lodged in the Bastille as though it were a castle, his taste for ‘extraordinarily fine linen’ and lace was indulged without question, and he was even waited on at table. 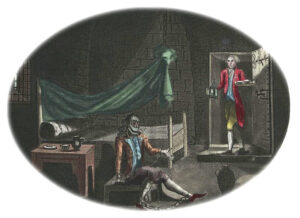 An eighteenth-century print depicting the Man in the Iron Mask in his Bastille prison room, unknown artist (Wikimedia commons)