In addition to his passion for portraiture, the King was a keen opera-lover. Composer Jean-Baptiste Lully enjoyed his special favour, composing operas, ballets and comedy-ballets in collaboration with Molière for the King’s enjoyment. In the Siècle de Louis XIV, Voltaire makes special mention of one such comedy-ballet, Les Fâcheux, and celebrates Louis XIV’s defence of Molière’s scandalous play Tartuffe against religious authorities who wished to censor it for its perceived mockery of hypocrisy among the clergy, in what became known as the Affaire Tartuffe.

Much of the 17th-century French literary canon has come down to us because of his support for writers, in particular for the major figures in 17th-century French theatre. He frequently commissioned plays from writers such as Molière, Pierre Corneille, and Jean Racine, at a time when theatre was considered an ungodly pursuit, and all actors were automatically excommunicated from the Church.

However, the King was also a source of inspiration for writers. In particular, the life of the court at Versailles provided rich material for the acid pens of François, duc de la Rochefoucauld, a former frondeur turned courtier and author of the Maximes, and Jean de la Bruyère, author of the satirical Les Caractères. These writers dissected court life and 17th-century French society in short prose snippets. The Maximes offer witty, penetrating, and highly quotable barbs on love, vanity, and hypocrisy, while Les Caractères are miniature portraits of some of the stereotypical fawners and hangers-on found at court, as well as analyses of contemporary social mores and attitudes. 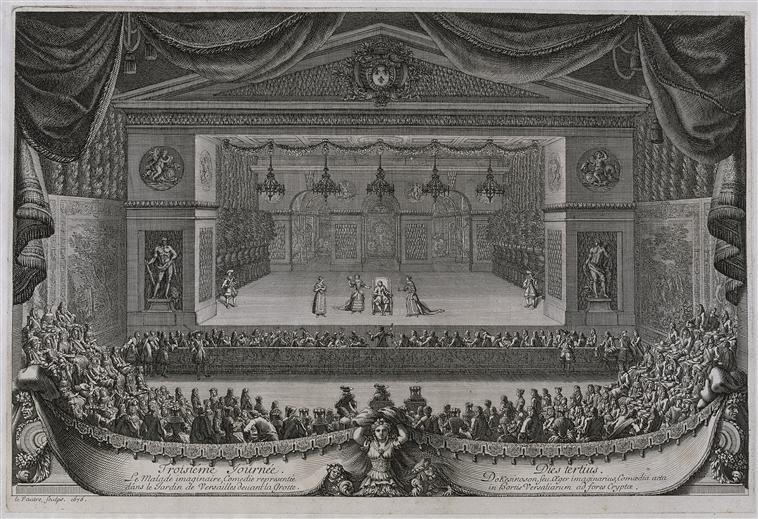 Fables and fairytales, Ancients and Moderns

We often think of the 17th century as a time of stability and order, but bubbling away under the surface was a strong undercurrent of modernity, hence its interest for Voltaire. The 17th century was a period of cultural and intellectual controversies, or querelles. The most monumentous cultural querelle, which galvanised every field of the arts, was the querelle des Anciens et des Moderns (quarrel of the Ancients and Moderns).

The supporters of the ‘Ancients’ believed that the achievements of Classical Greece and Rome represented the apogee of cultural sophistication, and that art and literature should therefore reprise classical and mythological themes, in a culture of imitation and emulation. By contrast, the new generation of ‘Moderns’, including Perrault, respected the achievements of Antiquity, but believed that they were not untouchable, and could be equalled by contemporary French art and literature. With his 1687 poem Le Siècle de Louis le Grand (to which the title of Voltaire’s tome perhaps makes reference), Charles Perrault produced a manifesto for the Moderns, celebrating the 17th century as an era to rival that of the Roman emperor Augustus, the age which produced Virgil and Ovid.

Perrault is the author of many of the fairytales we know and love, including Cinderella, Little Red Riding Hood, and Sleeping Beauty. He was also a friend of Louis XIV’s finance minister, Colbert. When writing his Contes (Fairy Tales), Perrault did not draw on Classical mythology, but rather on traditional French folk stories, to which he added a double moral. For example, his tale of Little Red Riding Hood ends with two morals: the first is a stern warning against the dangers of wolves in woods; the second, a warning to naïve first-timers at Versailles to beware smooth-talking rakes and libertines.

However, as portraits of Louis XIV dressed as Apollo and Jupiter indicate, 17th-century modernity was about taking the best of Classical culture and bringing it up to date, not rejecting it completely. Aesop’s Fables experienced a renaissance in the 17th century, as his tales were rewritten in sprightly French verse by Jean de la Fontaine (English translations here) who dedicated his educational fables to the Dauphin.