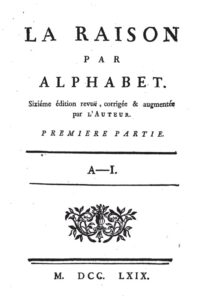 The eighteenth century was, amongst many other things, the age of the dictionary. In the spirit of the period, Voltaire contributed to collective projects such as Diderot and D’Alembert’s Encyclopédie, but also produced his own collections of alphabetically arranged articles. The Complete works of Voltaire has published all the alphabetical collections, enabling scholars to take stock and study these groupings in a way that was not previously possible.

Voltaire was probably recruited to the Encyclopedists’ cause in 1755, and he contributed 45 articles to the work. Mostly relating to aesthetics and style, but including the important articles ‘Français’ and ‘Histoire’, Voltaire’s contributions must have given him a taste for dictionaries, for only a few years later he accepted responsibility for articles beginning with the letter T in the new edition of the Dictionnaire de l’Académie française (1762). Sixteen years later, he was to propose a new Projet de dictionnaire présenté à l’Académie.

Until 1765, in the hiatus between volumes 7 and 8 of the Encyclopédie, Voltaire remained a tireless supporter of the enterprise, but in 1764 he launched his own alphabetical collection, the notorious Dictionnaire philosophique. Also known under the title La Raison par alphabet, the work made no pretence of objectivity and many articles were violently anticlerical in character. New articles continued to be added until 1767 and, soon after, having eventually turned down an offer to collaborate on a new Encyclopédie with the French printer Panckoucke, Voltaire launched his own venture, the Questions sur l’Encyclopédie.

Published in nine volumes between 1770 and 1772, with further articles appearing in 1774, the Questions engaged with the Encyclopédie, now complete, but also reproduced some of Voltaire’s own Encyclopédie articles, with changes, a few of which had already reappeared in the Dictionnaire philosophique. Only recently, with the Voltaire Foundation’s edition of the Questions, are we able to begin to see what aesthetic and ideological principles are at work in this major text.

A number of ‘alphabetical articles’ were inserted into Voltaire’s complete works in the first posthumous edition in 1784. Known today as the ‘Articles du fonds de Kehl’ (‘Kehl material’), these texts, taken from manuscripts found amongst Voltaire’s papers after his death, benefit from their own volume, Œuvres alphabétiques II. Questions regarding their origins, dating and status, as well as the possible relationship(s) between them, are all addressed.